Hi Alexandre, you submitted your BCI research “High-dimensional (8D) Control of a Complex Effectors such as an Exoskeleton by Tetraplegic Subject Using Chronic ECoG Recordings Using Stable and Robust Over Time Adaptive Direct Neural Decoder” to the BCI Award 2020 and won 2nd place. Could you briefly describe what this project was about?

Alexandre: “Numerous accident or diseases lead to partial or complete motor disabilities. Just in France, every year, 10 000 spinal cord injuries leading to paraplegia or tetraplegia are registered. The “BCI and Tetraplegia” project of CLINATEC (A biomedical research Center including CEA-Grenoble and University Hospital CHU Grenoble-Alpes teams) is a clinical trial in which an online BCI system based on semi-invasive recording allows tetraplegic patients to control complex effectors. We demonstrated that a tetraplegic patient implanted with epidural electrocorticographic (ECoG) implants (WIMAGINE®) could control several limbs from an exoskeleton during a long period of time without requiring daily recalibration.”

Alexandre: “Our primary goal was to provide the proof of concept that it is possible, for tetraplegic patients to control complex effectors, such as a 4-limb exoskeleton, thanks to ECoG brain activity monitoring and direct neural decoding. After the ECoG recording implants surgery, the patient was able to already perform simple task. After 3 years of training, the patient was able to walk and control both arms of the exoskeleton in real-time. We also showed that the decoding algorithms used for the decoding of the patient’s neural signal performed good and stable decoding performance when it was updated during several sessions using online incremental closed-loop decoder adaptation procedure. Our next goal is to go further in the experiment complexity such as object grasping etc. to get closer to daily life applications.”

Alexandre: “This project rely on three innovative key elements: the exoskeleton, the epidural ECoG implant name WIMAGINE® and the online decoding algorithms used to decode the brain neural signals of the patient.

Alexandre: “For chronic brain neural signals processing, CLINATEC designed an innovative wireless epidural ECoG recording system named Wireless Implantable Multi-channel Acquisition system for Generic Interface with NEurons (WIMAGINE). This fully implantable device records the neural signal at the surface of the cortex above the dura matter before to send wirelessly the signals to the decoding system which translates the neural signals into command to the exoskeleton.”

Alexandre: “Finally, the decoding algorithms designed for the clinical trial are based on Mixture of Experts algorithm structure. One regression model is associated to each type of movement of the exoskeleton (3 Dimensions continuous translation of the left hand, 1 Dimension rotation of the right wrist, etc.). Finally, a Hidden Markov model is calibrated in order to activate or inhibit the prediction of the regression models to avoid non zero velocity movements from non-controlled limb. Each the models are updated in real-time during the online closed-loop experiments in an incremental manner in order to integrate the patient’s visual feedback into the calibration process and therefore allow the model to learn from the patient and the patient from the model.” 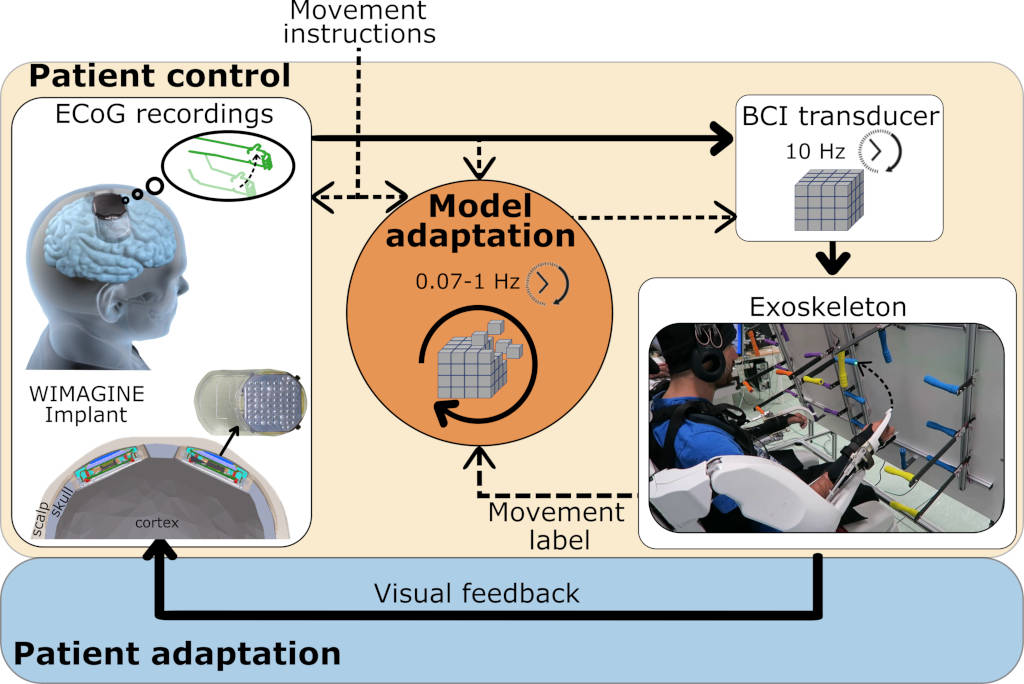 Alexandre: Obviously, tetraplegic patient may benefit a lot from our research. Such motor BCI system may give back some mobility and autonomy to highly disabled patient which is a major concern for social life and professional reintegration. Moreover, the proposed BCI system should also be considered for paraplegic patients and in the case of rehabilitation applications.

Alexandre: “Indeed, the results are promising and motivate us for future clinical applications. To our knowledge, this is the first time that an exoskeleton is used by a tetraplegic patient to perform alternative bimanual tasks during long term experiments with a fixed model during more than 6 months. Model stability across time is a major challenge of the BCI field, the proposed solution based on online incremental closed-loop adaptive decoder already highlighted numerous benefits to improve the decoding performance and robustness. Our team will achieve further investigation on the patient and model training in order to improve BCI systems.”

Alexandre: “CLINATEC is a relatively young laboratory, this is really important for us that the BCI community acknowledge our work knowing all the tremendous research results that were presented by the other teams. In a more personal point of view, I could not hope a better way to end my PhD.”

Alexandre: “As previously mentioned, “BCI and Tetraplegia” clinical trial is based on multiple innovative blocks requiring knowledge from several field going from robotic, mechatronic for the exoskeleton, hardware and firmware electronic development for the implant improvement, applied mathematics, signal processing for the neural signal decoding step, neurosciences and medical skills for patients training etc. Every year, CLINATEC welcomes students to work on the BCI project and many other exciting research topics.”