As always, the first talk was from Christoph Guger. Today, he spoke about ECoG and functional mapping.

Christoph explained the difference in spatial resolution between EEG and ECoG data.

For that reason, g.tec medical engineering started to develop a high-gamma mapping tool that is called cortiQ. Neurosurgeons are able to map the most important, eloquent brain functions of a human being just within a few minutes.

The cortiQ system can be used: 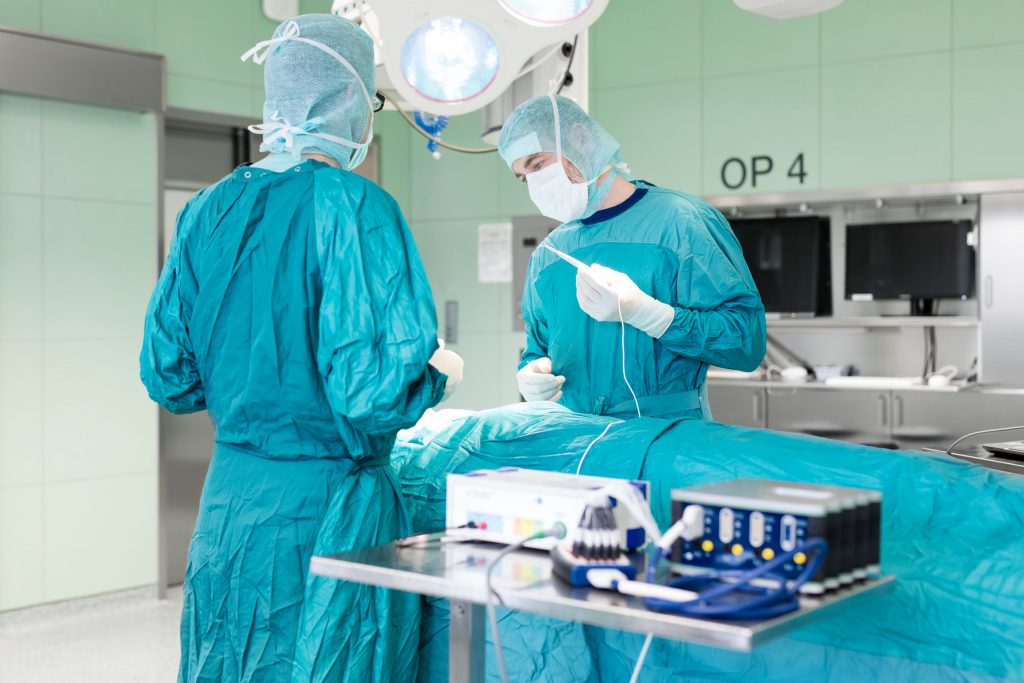 He explained how to create a montage to plan where the ECoG grids are going to be implanted. Depending on the surgical needs, they are placed over the sensorimotor region, temporal lobe, visual cortex, and/or other areas. This must be defined in the Montage Creator of the cortiQ system.

Then an experimental paradigm can be setup that specifies the tasks that the person has to perform. This can be done with the paradigm editor. Both steps are typically done in the course of the surgical planning.

When a patient undergoes a brain mapping, cortiQ replays the experimental paradigm for the patient to perform the task. A whole mapping procedure typically lasts around 3-5 minutes.

Fan also demonstrated the g.HIsys rapid prototyping software environment to configure a whole closed-loop experiment with ECoG data recorded with a g.HIamp. He showed the audience, how a real-time system can be setup to recognize 16 different types of visual stimuli given to the patient. This allows (for example) decoding in real-time if a patient is seeing a face or a symbol on a computer screen. 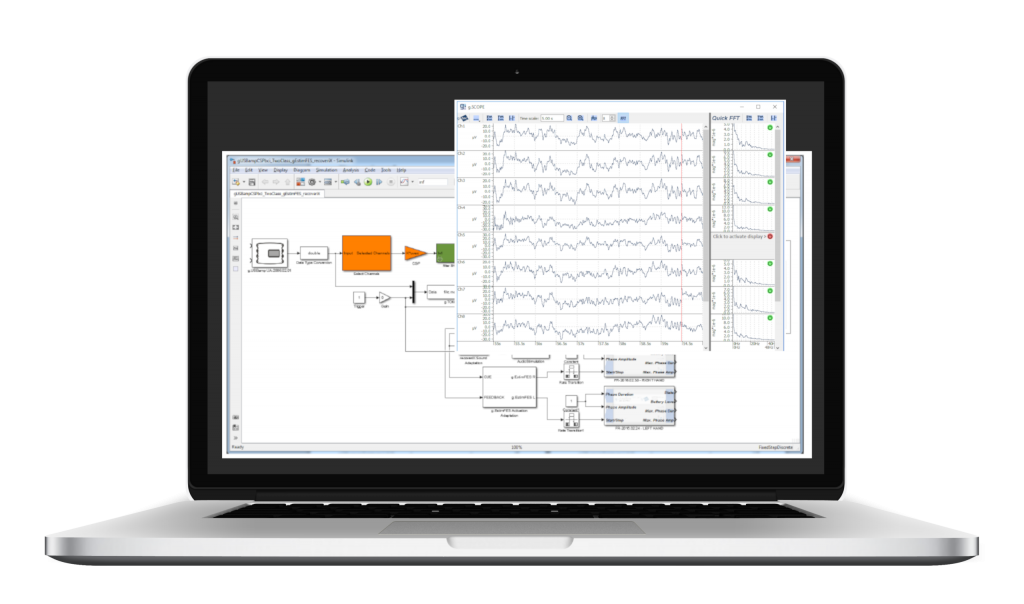 The third session was given by Johannes Grünwald about Optimizing Open-loop and Closed-loop Brain Stimulation Procedures.

He pointed out some crucial parameters for doing electrical stimulation with surface ECoG electrodes and depth electrodes used for DBS. You can use the g.HIsys software environment to design real-time experiments with biosignal amplifiers to record neural spikes and ECoG data.

The new g.Estim Switching Unit can be controlled in real-time to select stimulation sites on the fly. You can also apply the electrical stimulation current to the cortical location. The device disconnects the amplifier during the stimulation to make sure that all the current is applied to the cortex.

Milena Korostenskaja from the Institute of Neuroapproaches gave a talk about What do invasive BCIs have to offer? Mapping brain function with ECoG. This time, she went deeper into how ECoG, MEG and fMRI recordings are done in hospitals and explained what technology is needed.

Just a few weeks ago, Milena and her team worked with a new-born child to treat epilepsy. Treatment of epilepsy is especially important in younger children because more and more neurons will be affected if nothing is done.

For her ECoG work, Milena uses grids, strips and also depth electrodes. Her talk addressed the validation of the high-gamma mapping technology with electrical current stimulation, MEG and fMRI. Her research showed nicely that, with high-gamma mapping, more information can be extracted and that it is more precise than e.g. electrical current stimulation.

Then, Nuri Firat Ince was on air to talk about Closed-loop neuromodulation setup for Parkinson’s disease. Nuri works in the Department of Biomedical Engineering at University of Houston in Texas.

During his talk, he explained Deep Brain Stimulation techniques for Parkinson’s patients. The electrodes are implanted and can stop the tremors in these patients along with electrical stimulation.

Beta oscillations in the LFB decode the pathological state in these patients and the systems are setup to detect this, and to design on demand deep brain stimulation into STN of the thalamus.

Nuri also demonstrated the development of biomarkers that show different types of Parkinson’s. Typically, Parkinson’s patients have either tremor or gait difficulties. For these patients, phase amplitude coupling can be used as a biomarker.

Right now, his group is performing chronic recordings in PD patients to explore whether and how the treatment helps. The phase-amplitude coupling can be used as a predictor of improvements in the patients. 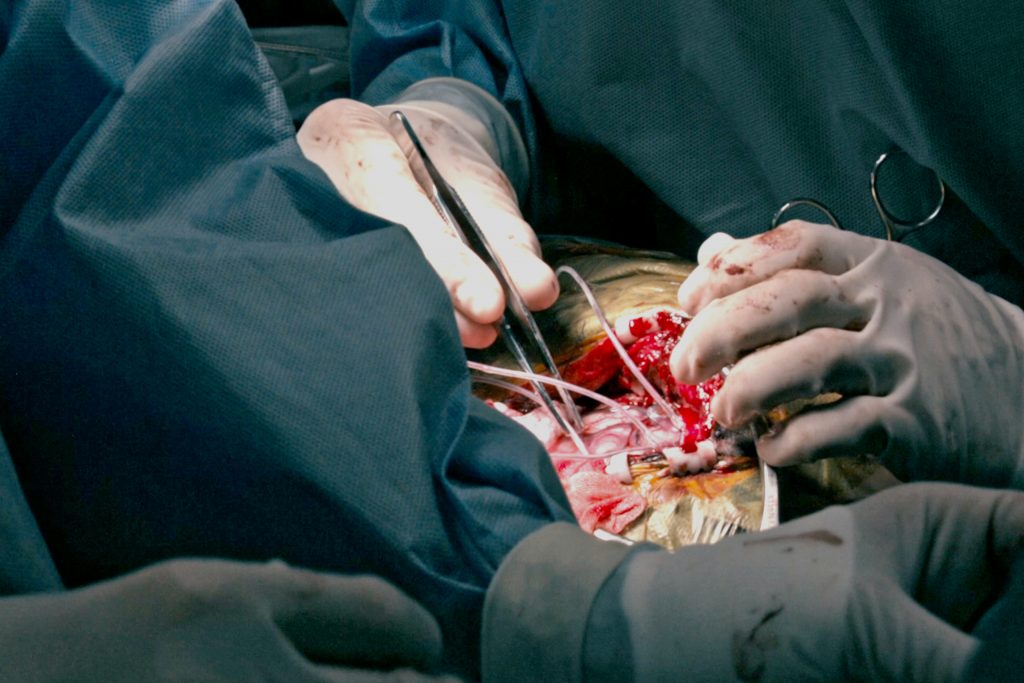 Finally, Dean Krusienski joined the Spring School from Virginia Commonwealth University to talk about ECoG BCIs to reconstruct speech. Dean gave a nice overview of groups working on speech production and reconstruction like Eddie Chang and Bob Knight from Berkley or Nima Mesgarani from Columbia University.

Dean’s group is using neural networks to reconstruct the speech signal efficiently. They are basically constructing a look-up table as new data comes in and gets compared with the training data to synthesize the speech.

As input feature, the log-power of the gamma band between 70-170 Hz is used. This allows Dean to reconstruct words like “shook”, “steer”, “pave”, etc. with great accuracy, and it is possible to understand the reconstructed signal.