BRAIN-COMPUTER INTERFACES WITH ? EEG AND OTHER BIOSIGNALS

The first talk was from Christoph Guger about Current and future applications of brain-computer interfaces. He showed different brain-computer interface systems and neurotechnology that his company (g.tec medical engineering) has developed for more than 20 years already. g.tec is also involved in about 15 international research projects to stay on top of its development.

By introducing the physiological background behind these principles, he explained the most important parameters that influence a BCI experiment. It’s very important to work with active electrodes (such as g.SCARABEO or g.LADYbird) because they can boost BCI performance by about 10% compared to passive electrodes.

But this BCI performance requires high-quality hardware and software components and a correct handling. These issues are especially important for BCIs that are meant to work with patients, when you just want to get the best results and not to lose any minute of EEG data just because of bad components or incorrect setup.

There are many different and useful applications that can be realized with BCIs. Here are some examples:

Applications for the control of virtual/robotiv avatars or robots can be done with a BCI. The only thing you need will be a high-level control strategy like the P300 to move a robot to certain positions or SSVEP to send continuous control signals.

What we know today is that we can sometimes get even better BCI performance with patients than with healthy people. This might be explained by the strong motivation of patients, who are often eager to perform a task and immediately see results.

Important trends in BCI research include many new medical applications that are entering clinical routines. It’s easier to assess the brain’s status with deep learning and advanced neurotechnology than just a few years ago. This shows physicians whether the brain improved due to BCI treatments or other interventions. Furthermore, we can even predict whether a treatment will be successful for a specific patient. 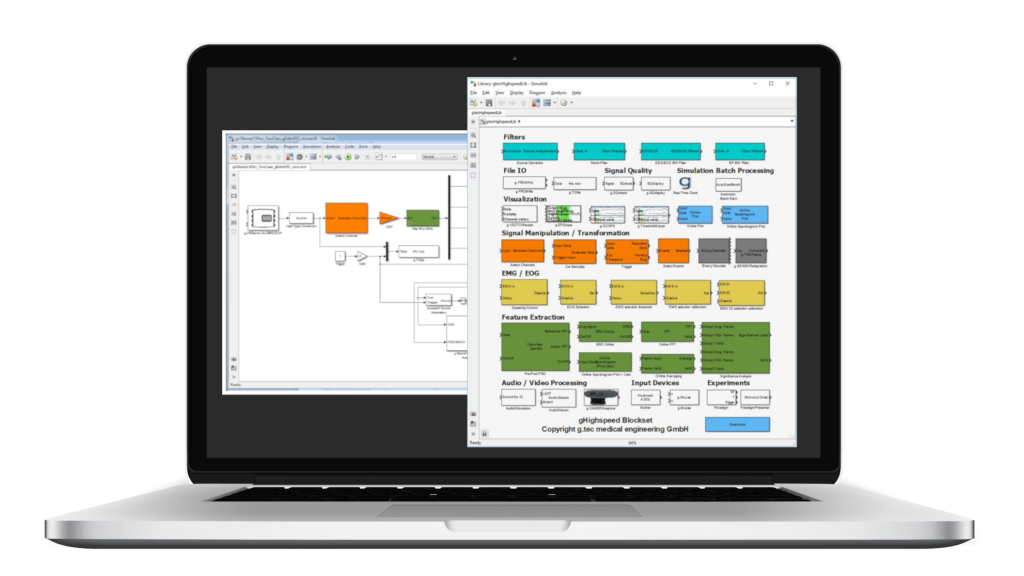 Micah Ching, Sales Representative of g.tec Hong Kong gave the second talk about Recording bio-signals from different and multiple subjects.  First of all, Micah never spoke before such a large audience. He was quite excited to show different toolboxes from the g.HIsys software package. This software package is a rapid prototyping environment to quickly realize BCI and Neurotechnology applications.

The g.HIsys library provides many blocks to run your BCI experiments in real-time:

With the Multi-device toolbox it is even possible to record from multiple amplifiers at the same time. This is very useful if you want to record biosignals from multiple subjects to e.g. conduct hyperscanning experiments or to monitor an audience during a concert. It allows users to attach multiple recording systems onto a single person. g.HIsys also includes a UDP interface that allows you to send data to other applications on the fly.

Using a wearable g.Nautilus Multi-Purpose headset with different body sensors on your subject, you’ll be able to record the EEG, ECG or EMG activity at the same time. The Multi-device toolbox from g.HIsys software takes care of all the different acquisition systems and it makes it really easy to acquire and analyze all the data on one computer, even in real-time. 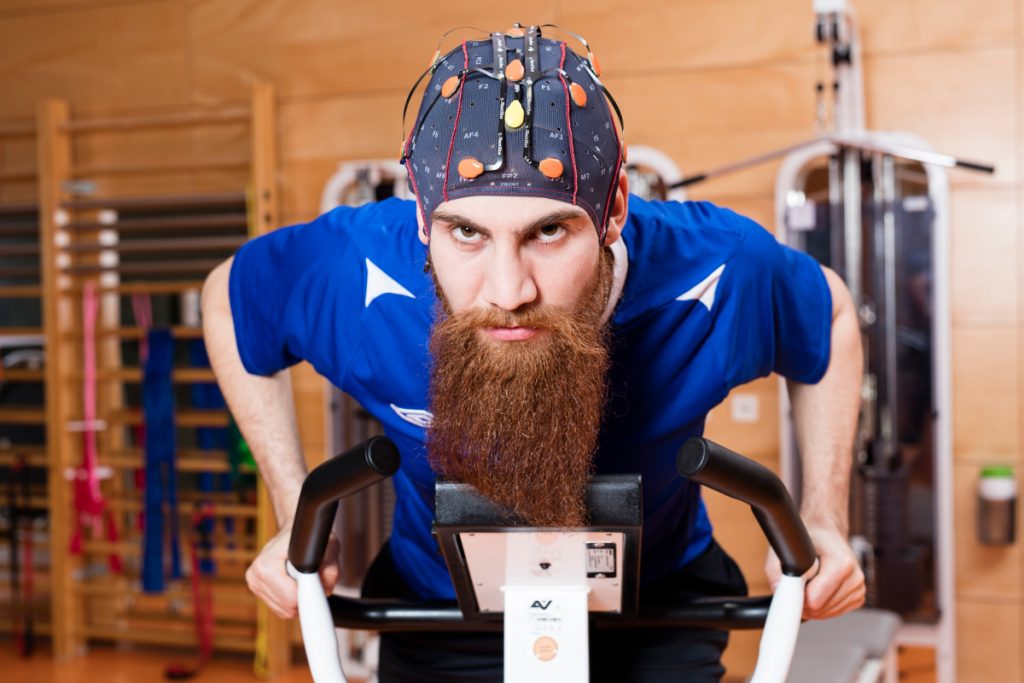 The third talk was given by Francisco Fernandes, who presented What’s important to know about the EEG. You must choose the correct electrode positions to capture your desired information from the brain. Here are some examples:

Use proper EEG electrode technology! The electrodes must be in solid contact with the head, otherwise you will get movement many artifacts from movement and other causes. You will even lose a lot of EEG data during your BCI experiment. Furthermore, it’s important is to use active electrodes because they reduce the high skin-electrode impedance, and therefore you will get no interference.

Nowadays, we can assemble 64 electrodes with g.SCARABEO and g.LADYbird electrodes within 5 minutes including an instant EEG quality check. This is a very important if you work with patients, because you want to be fast. Otherwise, the patient gets exhausted before you even start your BCI experiment.

With dry electrodes, you can do it even faster and you will not need gel. But dry electrodes are more sensitive to movements. The g.SAHARA performs very well at cognitive tasks like a P300 speller or for daily use. If you want to conduct a BCI experiment where you or your subject is moving a lot, it’s better to use wet electrodes. The Unicorn Hybrid Black offer hybrid EEG electrodes that can be used wet or dry.

Finally, Francisco showed a live EEG measurement during which he explained what the different EEG oscillations like alpha and beta look like and how to recognize artifacts in the data. Eye-blinks occur mostly on frontal regions and have frequencies below 6 Hz, so they can easily be filtered out. Muscle artifacts occur above 20 Hz and overlay the beta activity, but you can use bipolar derivations to reduce these artifacts. 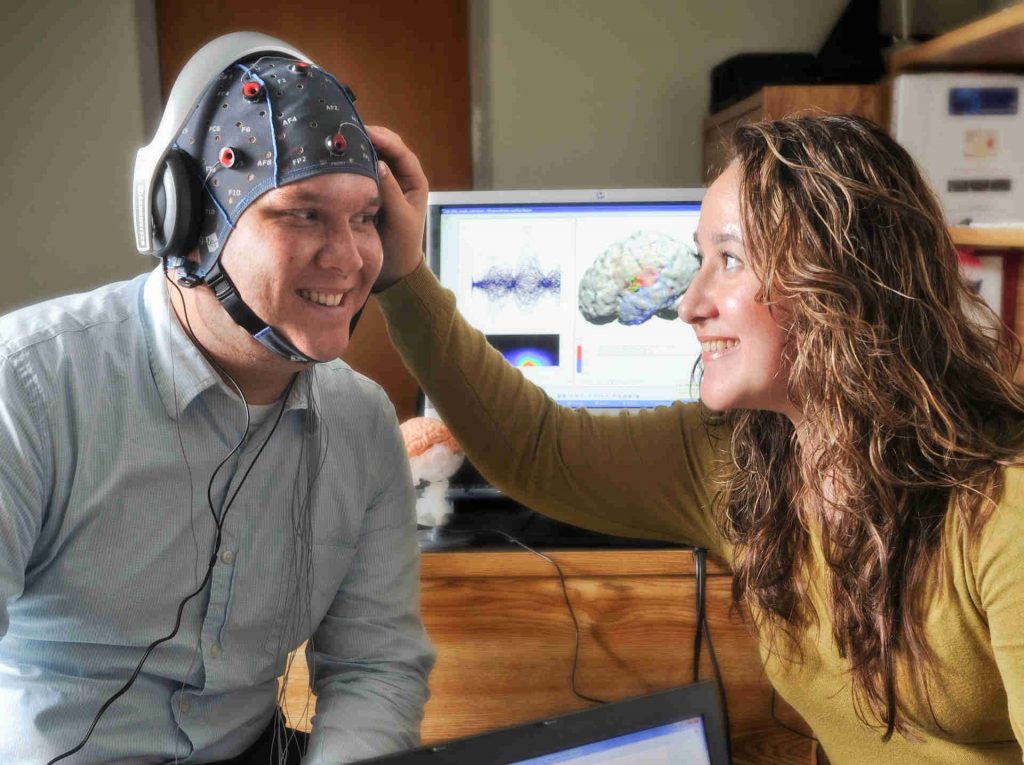 Keynote speaker and Neuroscientist Dr. Milena Korostenskaja gave us a short introduction of the Principles of neurorehabilitation with BCIs. Milena is part of the Institute of Neuroapproaches, Orlando, Florida and works with EEG, ECoG, MEG and fMRI in her research.

For many years now, Milena’s research has been dedicated to the brain. Using intracranial EEG in Cincinnati in the USA, she worked with up to 256 ECoG channels with grids and strips directly on the cortex of a patient. As a neuroscientist, she worked together with neurologists and neurosurgeons to perform these studies.

After that, she moved to a pediatrics hospital in Orlando, Florida. This hospital is the biggest of its kind in the USA, and it was very interesting for Milena to use ECoG and EEG technology with children.

Over the years, she became interested in the rehabilitation of stroke patients with BCI technology. This interest took her to Austria to learn about recoveriX at g.tec medical engineering’s headquarters.

From there on, Milena studied the most important factors for a successful neurorehabilitation of stroke patients. She has been fascinated by the fact – even years after the stroke – it’s possible to improve motor functions with BCI technology. 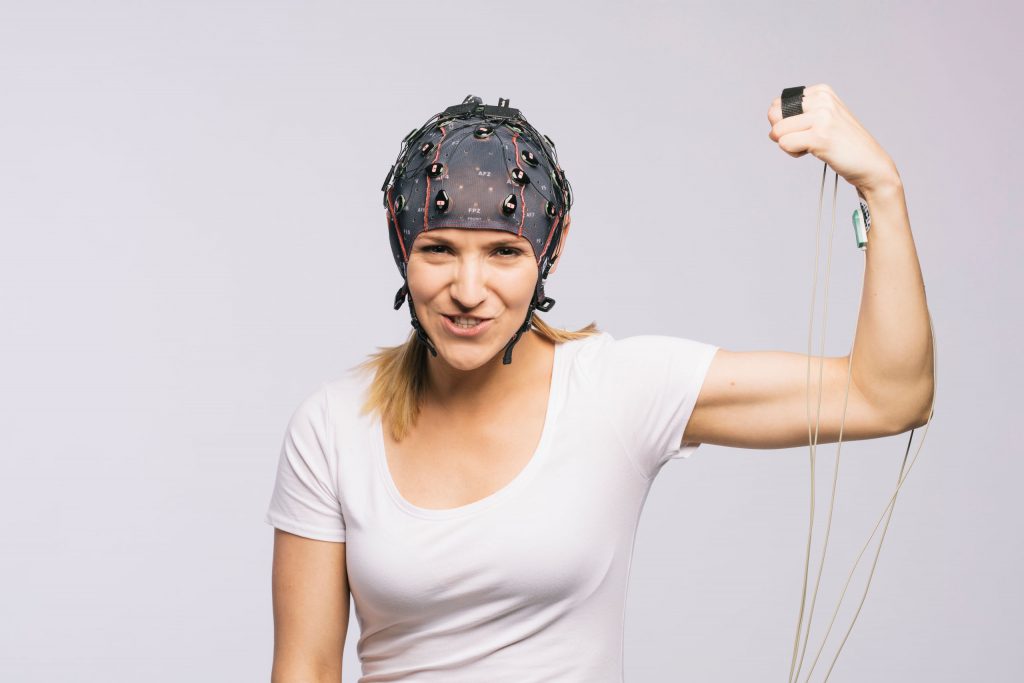 Katrin Mayr, Sales Representative from g.tec USA gave the last presentation of Day 1 about How to record the ECG. The ECG or electrocardiogram reflects activity from the heart. and Katrin’s talk described technology to record it.

First of all, this requires ECG electrodes that are mounted either on the chest or on the extremities. The most common ECG derivations are done according to methods from Goldberger, Wilson or Eindhoven. If you look at the Eindhoven derivation, you can find the so-called “QRS complex”.

QRS complexes are certain features of the ECG that represent the contraction of the heart muscle. If you detect the R-peak and measure the time between the R-peaks, you can calculate the actual heart-rate.

The changes in the heart-rate are called heart-rate variability and are measured with time domain or frequency domain features. These features can easily be analyzed with g.HIsys and g.BSanalyze.

g.BSanalyze is an offline processing software package that includes an ECG toolbox. With this software, you can detect sympathetic and parasympathetic nerve activity or analyze the ECG data along with EEG data to find correlations.

The heart-rate and heart-rate variability are important additional signals when (for example) you want to understand the adaptation of mountaineers in high altitude medicine or the stress level of a person performing a cognitive task.