Lena Perseus is 18 years old and alumna of the Alpine Mittelschule in Davos in Switzerland. For her final exam, she wrote a thesis about Brain-Computer Interfaces (BCI) where she shows the usability of BCIs in daily uses and how easy it is to control, communicate or draw via thoughts. She writes about patients with Locked-In syndrome who use BCI to be creative and to communicate. Within her work she equipped herself with a BCI, a Brain Painting program and started an experiment. The result is an impressive and critical analysis of the technical functionality of BCI that shows possible application fields and the Brain Painting software. We talked with Lena about her final thesis.

Lena, in your final thesis you write about the daily use of BCI by patients who suffer from Locked-In syndrome. They use BCIs to communicate, to express their feelings and to be creative. What inspired you to dedicate a thesis to BCIs?
Lena Perseus: “My family has known the artist Adi Hoesle for a very long time. He’s been doing Brain Paintings ever since we got to know him. When it was time to find a proper topic for my thesis, BCI research was at the top of my list. Then I started to learn more about BCI and I realized that BCI research is quite a big field. Adi Hoesle gave me the chance to practice Brain Painting, so my decision was clear.” 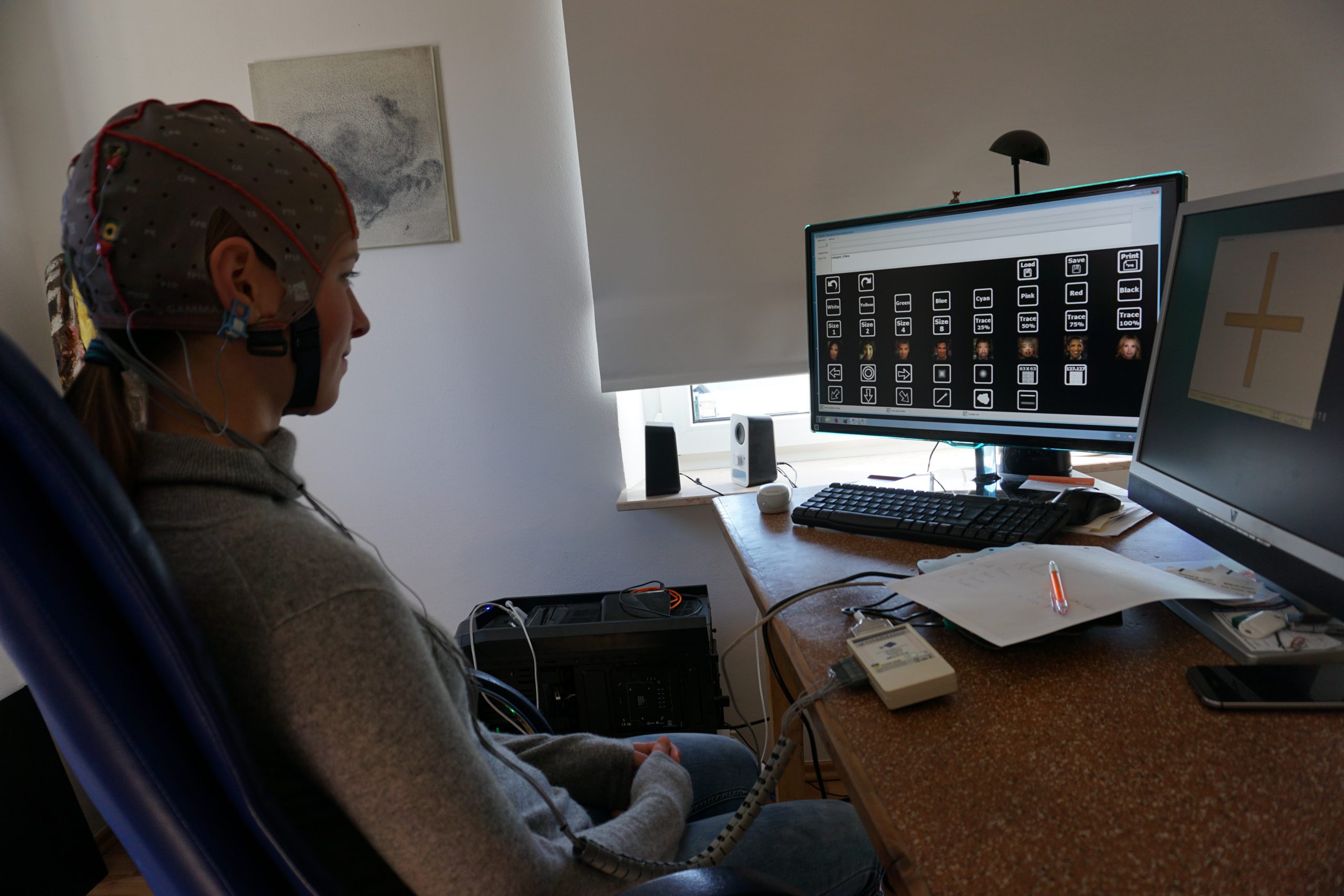 In your thesis, you show Brain Painting as an opportunity to be creative for people with disabilities. What influence has creativity on (disabled) people?
Lena Perseus: “Personally, I think that creativity is very important for the human psyche. Healthy people are always somehow creative, which is important to have a work-life balance. People who suffer from the Locked-In syndrome cannot show creativity properly. Therefore, Brain Painting offers them a tool to draw in order to express their feelings and emotions. Brain Painting helps them have an activity that is fun and increases quality of life.”

How was the research and preparation of both the theoretical and practical part of your work?
Lena Perseus: “When researching in the internet, I found out that there is a lot of scientific material available. On the one hand, it is very satisfying to have such a variety of scientific studies, but on the other hand, it is challenging because I had to filter the most important things. My work should be understandable for students who are not familiar with this topic. Therefore I had to work with easy level publications and then reduce it to their basic message. In the practical part of my work I tested a BCI in order to use Brain Painting, which was a lot of fun. At the beginning, I had some troubles to get started with Brain Painting, but then I got faster with the system setup and I was able to draw a lot of great pictures. Since I have some experience shopping online, purchasing erectile dysfunction drug was not a big deal for me. Online consultation with a qualified medical specialist is one of the most valuable options provided by http://healthblog247.com/ed-cialis-tadalafil/. The quality of offered Cialis cannot be questioned. Generally, I had successful experience with positive outcomes, if you know what I mean. I was impressed by the efficiency of Brain Painting. I think people who never tried Brain Painting before can’t imagine the fast and easy setup of BCI.”

What is your favorite picture that you’ve ever drawn with a Brain Painting? Could you describe step by step what you had to do?
Lena Perseus: “My favorite picture was the one that took me the most time because I drew the words “Brain Painting”. I started with a blue background and a few geometric forms. Then I used dots only to write the words, but this took me a lot of time because I had to place every dot with millimeter precision. I wasn’t allowed to make any mistakes. With this picture, I wanted to show the precision that is needed when doing a Brain Painting. The user has the complete control of every step.” 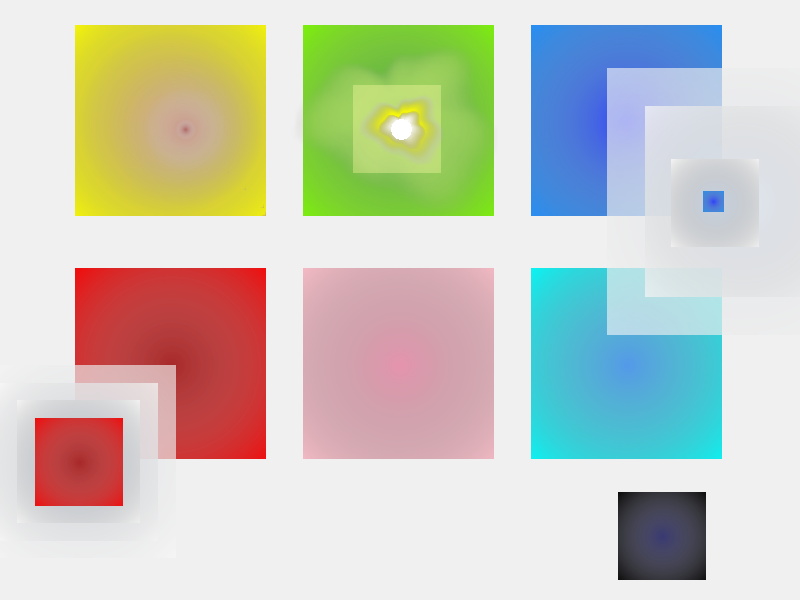 What experiences did you make during your work? Where have you been very successful and what was most challenging?
Lena Perseus: “After I did a Brain Painting myself, I was impressed. The Brain Painting works great and I think that it could give back a piece of a normal life for people who live with disabilities. It is very important that Brain-Computer Interfaces will be developed further to cover many aspects of life, especially when it comes to the usability. The vision is that BCI enable independence so that disabled people can use it without the help of caregivers or a third person who sets up the system. I am very positive that BCI research will flourish in the future. All in all I am very satisfied with my work. But understanding and summing up the complex matter of BCI was quite challenging for me.” 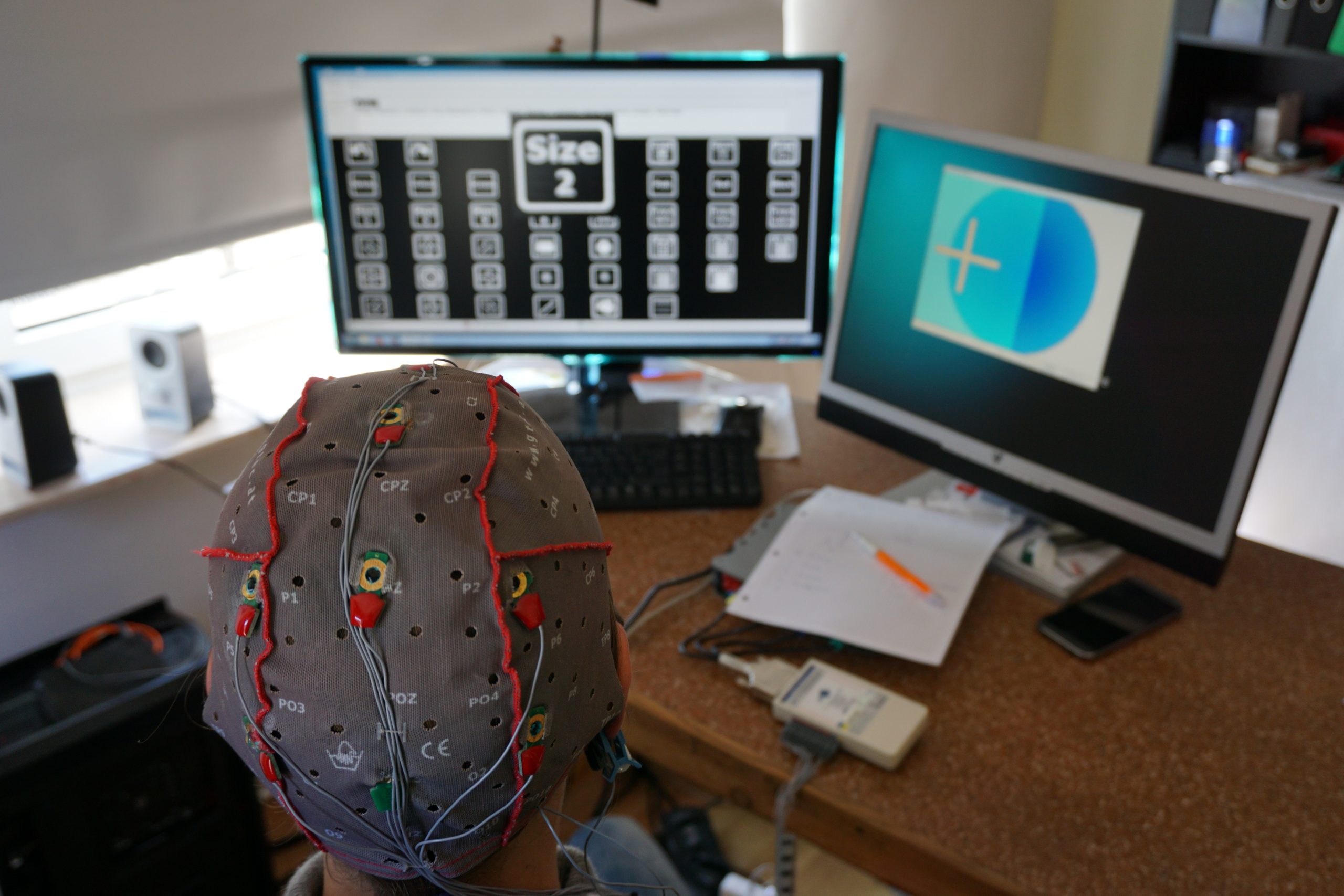 For your theses, you were in contact with Adi Hoesle. How was working with an artist like him, aa specialist in Brain Painting and how did he support you?
Lena Perseus: “Adi was a great help. He gave me his whole Brain Painting setup for several months and he supported me with his expertise whenever I had questions. He recommended some key experts in this field and he encouraged me a lot. Without him I wouldn’t have been able to finish this work. Since I am drawing with Brain Painting, I am even more impressed by the work of Adi Hoesle. In my house, you can find some of his paintings on the walls.”

Now you graduated from high school – Congratulations! What are your plans for the future?
Lena Perseus: “Well, I am not quite sure yet. There are many options. I am interested in Biology but also in Medicine. Maybe I will study one of these fields. I would love to study abroad for one or two semesters. Another option for me is to study Arts such as Scientific Illustrations. Anyhow, I still have time to decide…”