The International Annual BCI-Research Award is one of the top accolades in BCI research. In 2016, Gaurav Sharma from Battelle Memorial Institute in Ohio (USA) won the BCI Award 2016 with his project about an implanted BCI for real-time cortical control of wrist and finger movements. Battelle is the world’s largest independent, non-profit research and development organization. It was founded in 1925 in Columbus, Ohio (USA). Battelle’s mission is to translate scientific discovery and technology advances into societal benefits. Gaurav Sharma is part of the Medical Devices Group at Battelle and the lead investigator on the NeuroLife™ program. As part of this program, he leads its efforts to develop enabling neurotechnologies that can help bypass disconnected pathways in the nervous system to link the brain directly to the body.  Read the interview with Gaurav and learn about his motivation and vision.

Gaurav, you won the BCI Award 2016 with your work on an implanted BCI for real-time cortical control of wrist and finger movements in humans. You competed with 51 other contestants and your submission was scored best. Can you shortly tell me what this project is about, and explain the results that you got?
Gaurav: “The goal of this project was to develop technologies that can enable a paralyzed person to regain voluntary control of his/her own limbs using signals recorded from within the brain. The neural bypass technology developed at Battelle uses signals recorded using an implanted brain-computer interface (BCI), machine learning algorithms to decode the signals, and a custom designed neuromuscular electrical stimulation sleeve to stimulate the muscles to evoke the movement that the participant is thinking about. Using this technology, our participant was able to regain control of his hand to grasp, manipulate and transfer different objects that are relevant to the activities of daily living. With use of this investigational technology, our participant, who has a C5/C6 level spinal cord injury (SCI), gained wrist and hand function consistent with a C7-T1 level of injury.”

What inspired you to investigate in this field?
Gaurav: “As a team, our scientists and engineers at Battelle have been focused on improving the lives of those who have lived with paralysis for more than a decade. We know that we can make an impact on their lives and bring them closer to functionality. As an individual, it was highly motivating and inspiring to be able to work on a technology that can make a positive change in a paralyzed individual’s life.” 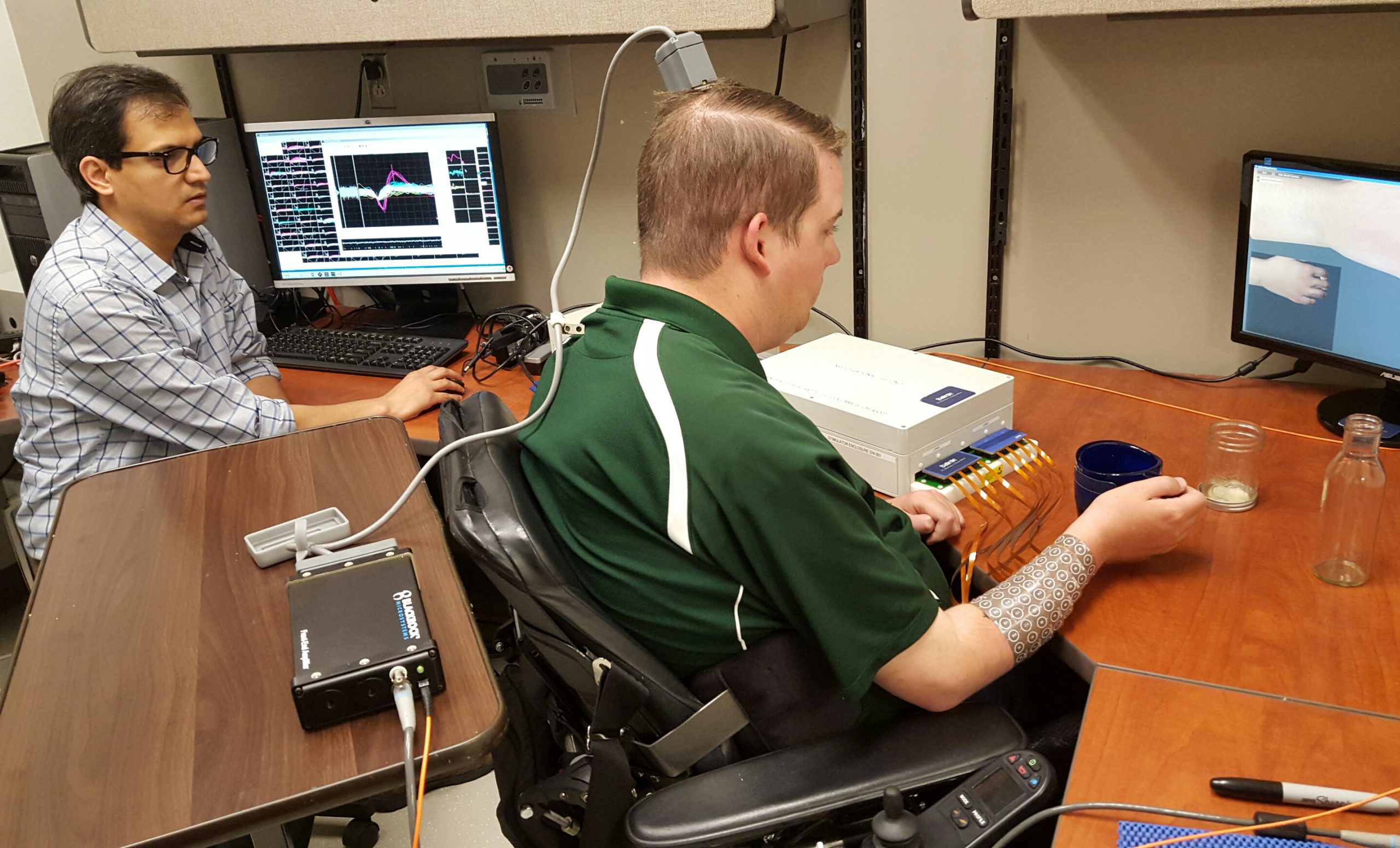 Is it possible to use your approach in daily lives?
Gaurav: “Currently, the technology is approved by the FDA under an Investigational Device Exemption (IDE) so it can only be used in a controlled laboratory environment. Given sufficient time and resources, we envision that we can develop a device that can be used by paralyzed individuals to help with their activities of daily life.”

What’s the toughest challenge that you face within your research?
Gaurav: “The entire project has been challenging from the beginning. Writing algorithms to interpret the language of neurons in the brain was no easy task. Creating a device to stimulate muscles in the forearm based on interpreted brain waves had never been accomplished before we did it. There are so many “firsts” in the NeuroLife project, and each time we make a new scientific discovery, it’s representative of an extraordinary amount of work and innovation by a team of very talented people. One big challenge, in particular, was that our participant has some residual shoulder and elbow movement after his SCI. This created a unique challenge for our decoding algorithms to correctly decode his neural modulation, as the participant uses a combination of these non-paralyzed muscles with paralyzed muscles that are stimulated using the BCI-controlled functional electrical stimulation to perform tasks.” 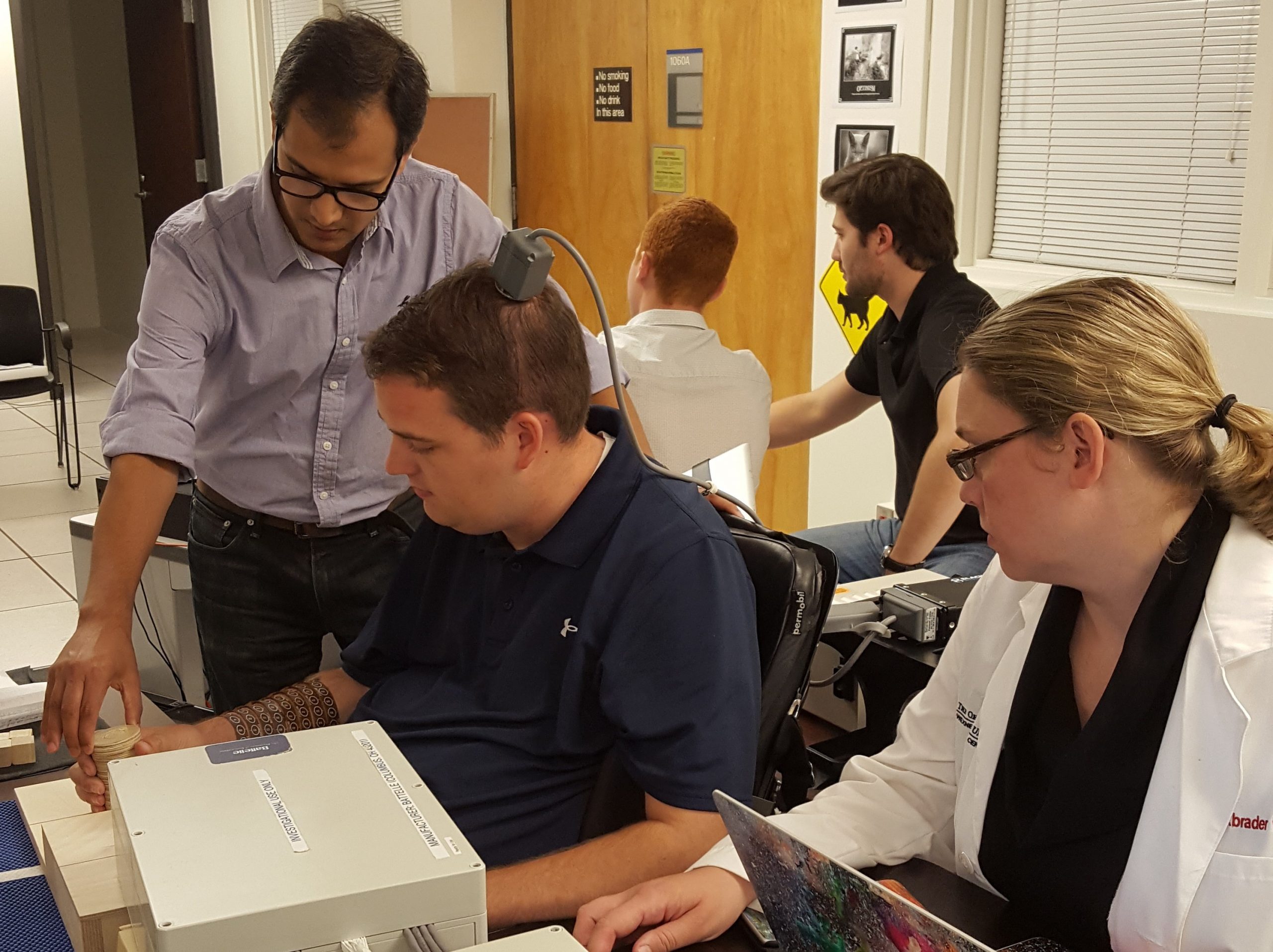 What were the special and positive moments that you experienced within your research?
Gaurav: “This project offered an embarrassment of riches when it comes to rewarding moments. Every single day, we get to work with our participant and see him grow and succeed, and learn from him. These are moments to be cherished. Two special moments for our team were when our participant was able to use the system to open and close his hand for the first time after his SCI, and when he was able to use the system to grasp and transfer a spoon object for the first time.”

Without considering the current limitations of this technology, what do you think might be possible with your research?
Gaurav: “We envision that, in the future, we would be able to develop a robust and portable system that a paralyzed individual can take home to assist him/her with functional activities of daily living and to help the person live more independently and with dignity.”