Aphasia refers to an impairment of language abilities, and is usually caused by a stroke in the left hemisphere. About 20 % of all first stroke patients remain with a persistent, chronic communicative impairment which has a large impact on their quality of life. Motivated by the success of recent BCI-supported hand motor training protocols, Michael Tangermann and his colleagues from the Albert-Ludwigs-University Freiburg, Germany, have implemented and validated a BCI-based closed-loop language training protocol for chronic aphasia patients after stroke. Michael Tangermann is the head of the jury for the BCI Award 2019.

g.tec: Michael, what’s your affiliation?
Michael: “I am from the University of Freiburg in the south of Germany, specifically the Computer Science Department. My Brain State Decoding Lab is embedded into the Cluster of Excellence “BrainLinks-BrainTools”. It not only provides funding for neurotechnology research, for which we are very grateful, but it also allows us to team up with other groups of the Cluster for truly interdisciplinary projects. The award-winning project, for example, is a joint endeavor with Mariacristina Musso and colleagues from the Neurology and Neurophysiology Dept. of the University Medical Center Freiburg.”

g.tec: You were nominated for the BCI Award 2018 and won second place. Can you tell me a little more about your submission?
Michael: “A special aspect of this work is that we go into a new application field with BCIs: the rehabilitation of language impairments after stroke. This foray of my group has been inspired by the growing number of novel BCI-supported motor rehabilitation approaches, which recently have started to generate scientific evidence of their efficacy. By transducing some of the underlying ideas into the language domain, we were able to address language deficits (so called aphasia) instead of hand motor deficits. For this transduction, it was extremely helpful that I had been conducting research on auditory BCI systems for several years already.”

g.tec: What are the results of your work?
Michael: “We have developed and tested a novel rehabilitation training protocol for patients with aphasia. Making use of BCI neurotechnology, we now are able to monitor in quasi-realtime some of the cognitive processes relevant in language tasks. This allows us to help a patient develop his/her language ability during the course of our training. Practically, our protocol foresees a patient training effectively for 30 hours. The training is intensive, and the patient visits the BCI lab at least 15 times within a few weeks.”

g.tec: How can I imagine the language task? How does it work?
Michael: “During training, the patient is seated inside a ring of loudspeakers while we record his/her brain activity. After indicating a so-called target word to the patient, we play a sequence of different words using the loudspeakers. The patient’s task now is to carefully listen to the sequence and detect the target words played amidst numerous other non-target words, which should be ignored. Each word stimulus elicits a transient response in the EEG signal. Our assumption is, that target words (if attended and processed by the patient) should generally elicit a different response than all the non-target words. If this is the case, and if we should be able to detect these differences, then we can provide positive feedback to the patient. Wrapping up, we hypothesize that this feedback reinforces a good language processing strategy.” 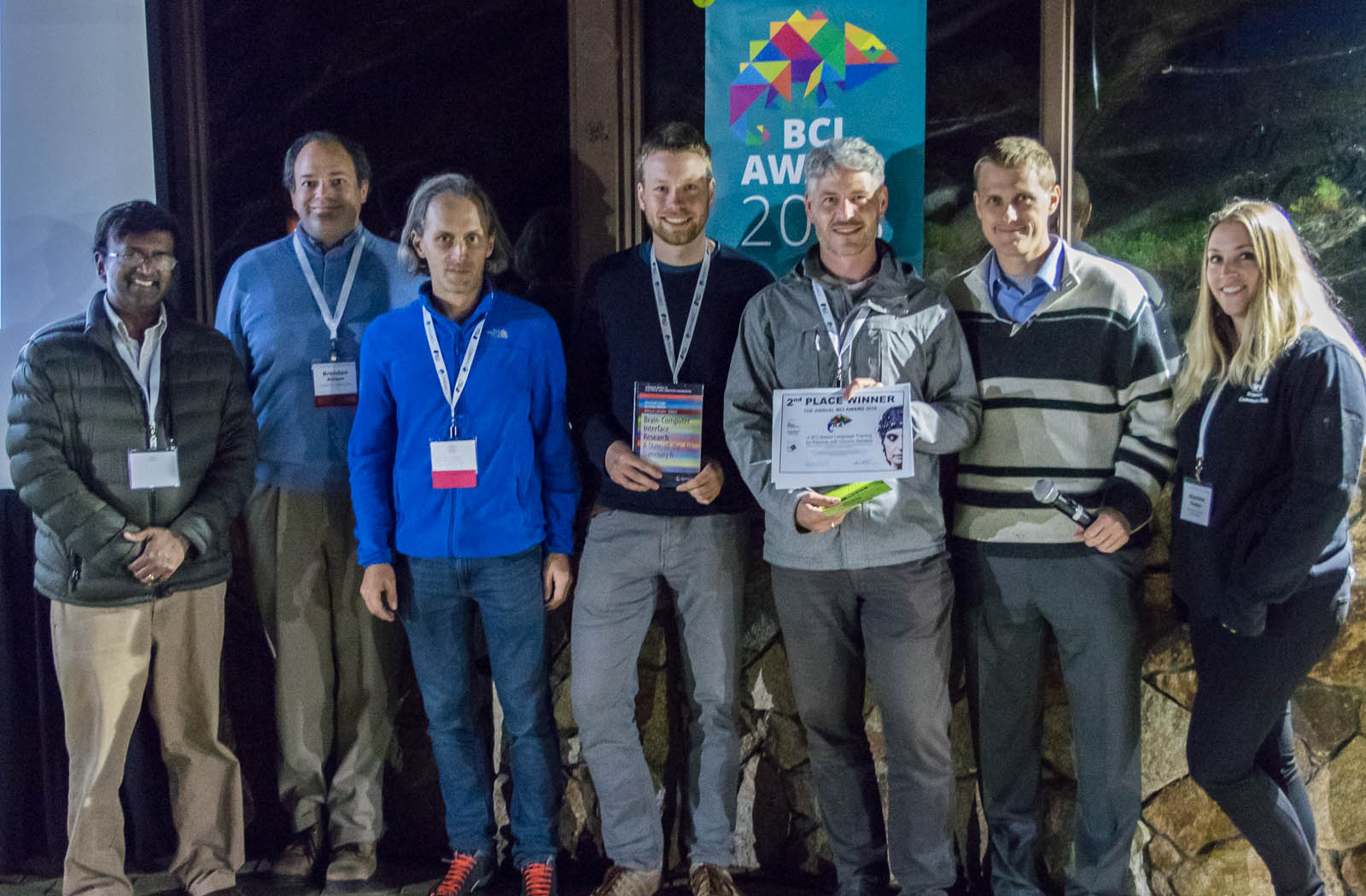 g.tec: So, what do you see in the brain when the patient is focusing on a specific word?
Michael: “Using machine learning methods, we can analyze each and every of the so-called event-related potential responses of the EEG that is elicited by a word played. Our algorithm is trained on the individual EEG signals of the patient, which enables us to detect even small differences between target and non-target word responses in quasi-realtime, even though these signals are hidden within the strong noise, which is typical for any EEG recording. The patient, however, can support this effort by concentrating hard on the target words and trying to ignore all the non-target words.”

g.tec: And what goals do you want to achieve in the future with your work?
Michael: “With the data we have collected so far, we are convinced that our novel BCI-supported language training can be beneficial for chronic stroke patients, whose stroke happened at least 6 months prior to our training. But of course we want to learn more about this and other subgroups of patients, e. g. those who show great improvement or who benefit less, and we want to understand why this is the case. A first step in this direction is to investigate which systematic changes in brain activity are triggered by our training. When I explain our novel paradigm, it sometimes irritates people to learn that our patients are not required to actually speak during our training, but only need to listen. At a second glance, however, many sub-processes relevant for language are involved both in processing and in production. Thus, we currently think very positively of this characteristic of our protocol, as it may allow for the participation of patients, who are not even able to speak any more due to severe strokes.”

“Digging deeper, we are currently recruiting chronic aphasic patients from Freiburg and the surrounding area to prepare for a randomized study. That will allow us to understand the exact causes for language improvements that we can observe. While there exists the possibility that the improvements may simply be the result of the circumstances of the training process (like in placebo treatment), we of course hope that the brain signal-based, task-specific reinforcement is what actually triggers the change. Otherwise we would of course not need a BCI system.” 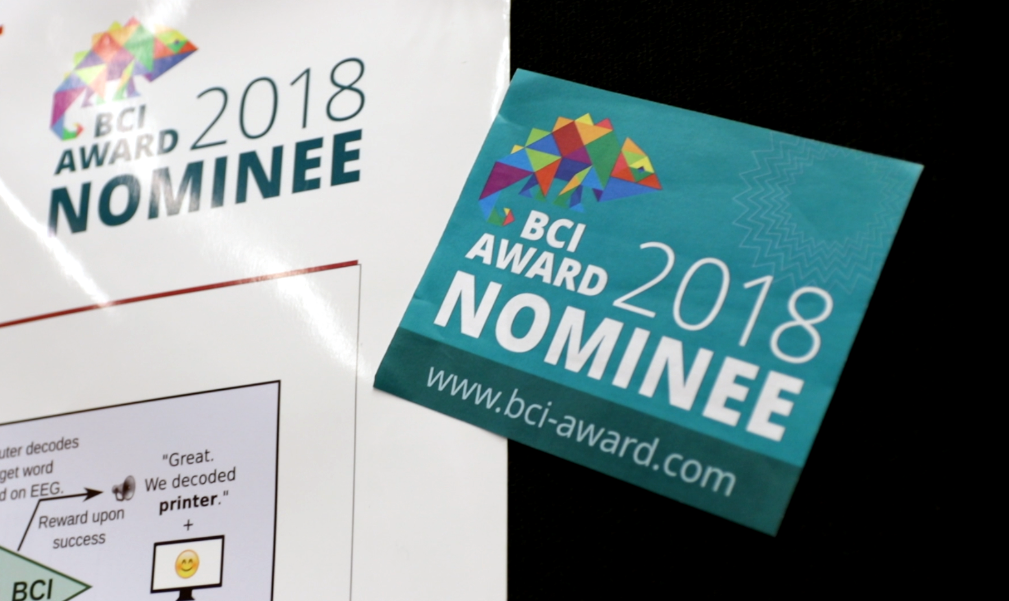 g.tec: Are you having patients in the lab or in the field?
Michael: “At the moment, we are running all of our experiments either in the labs of my research group or in our partner’s clinic in Freiburg. This allows us to control the procedures and the processes well, which is important at the current state of our research. On the long run, however, we would like to collaborate with rehabilitation clinics and speech therapists to run the training protocol with simplified setups outside our own labs.”